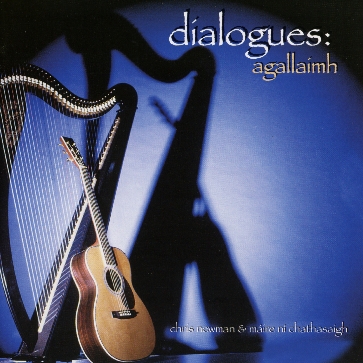 "a rich and breathtaking album, in which the various styles and instruments discourse together with consummate ease, grace and joy"

"the apogee of
instrumental music"


"the playing is so good it should be outlawed!"

"fireworks from the harp"

Máire and Chris's album of multiple musical conversations. From the purest well-spring of Irish music come the 17th century solo harp piece Gol na mBan san Ár, the newly-discovered 18th century Hidden Pearl arranged by Máire for harp and string quartet - graced by the haunting violins of Máire's sister Nollaig Casey - and an elaborate 19th century set of jigs. Two of the four songs are here recorded for the first time in these versions, one of them being in the beautiful free-form, uniquely Irish “sean-nós” style. The Scottish tradition is represented by the Beeswing Hornpipe and the Highland piping tunes Donald MacLean’s Farewell to Oban and Duntroon Castle. From this traditional core, they explore new musical styles and approaches to arrangement. Three Piece Suite, composed by Máire in a traditional style, gets a slightly African-influenced treatment. Other full band arrangements include the irresistably jaunty traditional American Twinkle Little Star and Chris’s compositions, the Caribbean-flavoured Banana Yellow and the jazzy Swinging the Lead.

TAPLAS (Wales) “With each outing they make, this pair continue to amaze and stun with their sparkling virtuosity and incredible tightness. Guest musicians include Máire’s sister Nollaig Casey on fiddle and Simon Mayor, who contributes a characteristically virtuosic solo in the swinging finale, on mandolin. The album title perfectly sums up the way Máíre’s harp and Chris’ guitar interact with each other. Perhaps the most stunning example of this is the foot-tapping, bluegrass style Twinkle Little Star, which is guaranteed to bring some sunshine into your life. As well as all these wonderful instrumental tracks, Máire also contributes several songs and her harp solo, Gol na mBan san Ár - an example of Ireland’s older harp music - has a spare, stark beauty about it, reminiscent of her performance of Carolan’s Farewell to Music. She plays with passion and admirable restraint—just listen to the bass notes of her Camac harp resonating boldly without interruption. Dialogues is a rich and breathtaking album, in which the various styles and instruments discourse together with consummate ease, grace and joy.”
- TAPLAS, Oct/Nov ’01

DIRTY LINEN (USA) “A judicious mix of lively dance tunes, lovely songs, classic Irish harp music, and general purpose fun. Ní Chathasaigh, who invented the playing of Irish dance music on the harp, is in fine form on a set of Irish jigs, a set of reels, a James Hill hornpipe, and a set of Scottish pipe tunes. Her fine version of Gol na mBan san Ár uses the silences between the notes to full effect and her singing in Irish is clear and strong as the wind. Newman, one of the most versatile and just plain fun guitarists around, takes the lead on tunes as diverse as Twinkle Little Star and a swingy original, Banana Yellow. A very strong recording.” – DIRTY LINEN (USA) June/July ‘02

TYKES NEWS (England) “Chris and Máire are off on another journey of musical discovery with this latest CD… the apogee of instrumental music. It’s perfectly played & exudes warmth, passion & pleasure. There are songs here also: Máire’s voice is pure and light with a subtle vibrato that suits the Irish style of singing. Máire is on a one-woman crusade to update the Irish harp from the twee to its rightful place as the instrument able to take on any musical task with guts and fire. When I listen to a new CD from the Newman/Ní Chathasaigh stable I expect, and get, fireworks from the harp. It is truly wonderful to hear its many facets as it is accompanied by all the other styles of strings strutting their stuff on this CD. Track eleven The Hidden Pearl is the perfect example with cello, harp, fiddle and viola not getting slushy or melodramatic. Although a slow piece it tries to climb out of the box, as the restraint it is played with barely holds back the passion.” - TYKES NEWS Autumn 2001

FOLK LONDON (England) “Máire and Chris have established themselves as firm favourites on the folk circuit. So it’s not surprising that this recording comes highly recommended. The first track opens uncharacteristically with the sound of the fiddle (performed by Nollaig Casey - Máire’s sister), catching you unawares. Ah, but this is just the set-up for Máire’s harp and soon we are treated to the dazzling display of arranging that has become Chris’s trademark. The funky slip-jig Chestnut Tree leads into The Reel of Peace joined by Stratocaster, but hang on, what’s that underpinning the last tune? A kind of Soweto top line. And all of this on the opening track. In fact, the whole of the album is so littered with gems that I’m having difficulty in containing the superlatives. Just take my word for it: the playing on this album is so good it should be outlawed!” - FOLK LONDON Oct/Nov 2001

SHREDS & PATCHES (England) “Two of the folk scene’s most respected musicians have put together a CD of what can only be described as beautiful music: a mixture of songs and tunes, all played with wonderful control & really effective dynamics. This is quality stuff: the range of material is excellent, with a really broad appeal. Perfect.” - SHREDS & PATCHES Autumn 2001

FOLKTALK (England) The term virtuoso is much overused these days but for once it is the only appropriate word to describe this duo. The breadth of musical ideas, coupled with outstanding technique makes this a truly remarkable album, with thirteen tracks demonstrating the dramatic range of both instruments and performers. This is an album of contrasts. There are slip jigs and reels aplenty which see Máire taking the tune for a walk with a sparkling clarity of sound which is a joy to listen to. At the other end of the scale is Gol na mBan san Ár, a deeply impressive and emotive slow air delivered with a stark and brooding simplicity. There are songs here too, a couple in Gaelic (translations in the insert) and one in English, all well delivered in a clear, undecorated style which treats the voice as another musical instrument and as such makes translation unnecessary. Set against the Irish / Scottish material are some little gems. Twinkle Little Star with its American feel and brisk syncopation or the jazzy, Django Rheinhart style of Swinging the Lead (Chris's own composition), are great fun. The latter gives Nollaig Casey an opportunity to display her considerable skill on fiddle. Watch out too from some fine rich cello work from Liz Hanks on I Love My Love. The last CD from Máire and Chris was 1995. Take it from me, this was well worth the wait. - Jim Hancock, Folktalk Autumn 2002