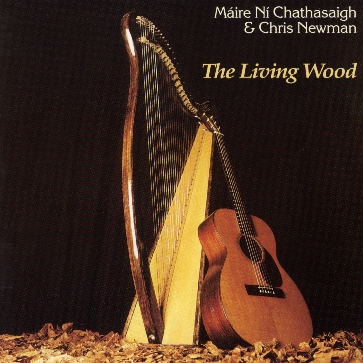 "in the virtuoso class"

"one of those inspired moments of musical imagination"

"elegant and yet impassioned"

"a magical collection of tunes played with stunning virtuosity"

About The Living Wood...

In 1988, Irish harper Máire Ní Chathasaigh and English guitarist Chris Newman released The Living Wood, their critically-acclaimed first album together. It originally appeared on the American Green Linnet label, then on Black Crow. The licence reverted to Chris and Máire's own label Old Bridge Music in 1995 and the album was digitally remixed and re-released shortly thereafter.  The Living Wood created something of a stir, being to our knowledge the very first harp/guitar duo album ever to be recorded. It was the Daily Telegraph’s Folk Album of 1988, and one of its top three of the decade. (It also provided the theme tune for the TSW TV series Off the Hook - and for John Creedon's then early-morning RTÉ Radio programme!)

Tracklisting for The Living Wood

EDINBURGH EVENING NEWS (Scotland)
“The Living Wood represents the coming together of two virtuoso performers… Máire is arguably the finest traditional harp player of her generation, whose revolutionary approach to her instrument has had a far-reaching and profound influence on the harp world”

THE GUARDIAN (England)
“The pairing of Chris Newman and Máire Ní Chathasaigh is one of those inspired moments of musical imagination... Both are in the virtuoso class...”

THE DAILY TELEGRAPH (England)
“As uplifting a set of tunes as I have heard in years… Imaginatively arranged, this selection of tunes skips from polka to baroque, hornpipe to Basque waltz… a perfect showcase for the skill and panache which distinguish Máire's playing of the Irish harp, and the brilliant way Newman has with his 1929-built Martin guitar… It was the folk album of 1988.” - Colin Randall

FOLK ROOTS (England)
"This extraordinary album...(is)...a sparkling blend of Máire’s Irish traditional music and myriad other musical influences that Chris has introduced… showcasing this remarkable duo's virtuosity and technical brilliance… As the title suggests, this is yet another proof of the adaptability of the ancient Celtic harp as a living instrument in today’s multi-cultural musical world."

THE SCOTSMAN (Scotland)
“At their recent Edinburgh concert, Newman’s finger-bustin’ bluegrass wizardry made an exciting contrast with Máire’s superbly-manicured traditional tones, and so it proves again in their joint album, The Living Wood (Green Linnet) where Newman contributes some invigorating American tunes to set alongside Máire’s Irish themes...Máire’s beautiful version of ‘Fare Thee Well Lovely Mary’ is riveting, (but) the solo harp of Carolan’s ‘Lady Dillon’, elegant and yet impassioned, is the high spot for me.”

BROADBEAT (Scotland)
"A magical collection of tunes played with stunning virtuosity...The playing throughout is breathtaking. A real humdinger of an LP showcasing some superb acoustic music.”


About The Living Wood

About The Living Wood