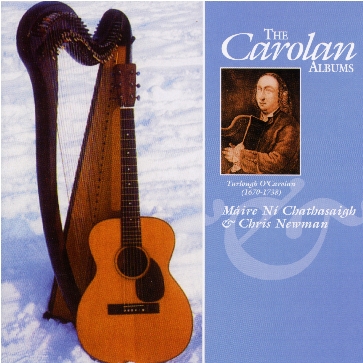 "a masterpiece of virtuosity"

"no one else could have done justice
to such a project"

"restores the harp to its true voice: the long arm of the music reaches back into
a noble tradition"

"in a plethora of Carolan records, this is the best"

"her deep understanding of the music, combined with technical skill and passion mark her out as
the foremost modern interpreter of Carolan"

"a cocktail to delight and intoxicate!"

"a must for any folk-related collection"

About The Carolan Albums...

In 1994, Máire and Chris released The Carolan Albums, a 66-minute CD containing 24 of the best-known and most beautiful compositions of the celebrated blind Irish harper and composer Turlough O’Carolan (1670 - 1738), to great critical acclaim. Carolan was the most famous of all the Irish harper-composers of his day, and his music continues to be the most popular ever composed for the harp in Ireland. It affords a great deal of scope to the creativity of the individual performer, since only Carolan’s melodies survive. This recording consists entirely of original arrangements, thoughtfully interpreted, of these beautiful tunes, informed by Máire's knowledge both of the native Irish harp tradition and of baroque forms, but with a discreetly contemporary tinge provided by Chris’s tasteful guitar.

Listen to extracts from all tracks on iTunes.   All of the harp arrangements on the album are to be found in Máire's book The Irish Harper Volume II, published by Old Bridge Music in 2001.

Tracklisting for The Carolan Albums

THE DAILY TELEGRAPH (England)
"A masterpiece of virtuosity from Máire Ní Chathasaigh, a scholarly Irish harpist, in truly inspired union with Chris Newman, one of Britain's most impressive acoustic guitarists... an enticing introduction to the elegant, Italian-influenced music of Turlough O' Carolan. This album is a must for any folk-related collection." - Colin Randall

THE IRISH TIMES (Ireland)
"If Máire Ní Chathasaigh wasn’t around, Irish harping would be so much the poorer. Her work, which goes beyond mere harp performance, could be described as an attempt to restore the harp to its true voice, or at least a voice that is true to its old self. To do this she has had to immerse herself in those fragmentary remains which endure in manuscript and old collections and which offer the only substantive clues to the way of the old harp. In this enterprise she is joined by Chris Newman, whose sensitivity to the Irish music tradition is well-attested... Harp and guitar partner each other in arrangements which leave conventional accompaniment far behind in their precision and attention to the finest detail. Unfussy, with all the spaces left empty and resonating, the long arm of the music reaches back into a noble tradition.” - Nuala O'Connor

TAPLAS (Wales)
“A cocktail to delight and intoxicate! Two dozen tunes by one of Ireland’s most celebrated melody makers...played with consummate skill by a harpist and guitarist who have rightly earned themselves a reputation as two of the most skilful perfomers around. Ní Chathasaigh and Newman have a perfect understanding of the grace and elegance of the music and the playing is faultless. The harp is rightly to the fore but the guitar complements it beautifully, at times sounding almost harp-like. Both introduce interesting details into their arrangements, without detracting from the overall shape of the tunes... Máire’s playing is truly breathtaking. Her deep understanding of the music, combined with technical skill and passion mark her out as the foremost modern interpreter of Carolan.” - Delyth Evans

FOLKWRITE (England)
“This CD is the product of the now famous collaboration between harpist Máire Ní Chathasaigh and guitarist Chris Newman... The sheer excellence of the musicianship... sets standards which should be aspired to not only in this field but throughout folk music. The sleeve notes are of a comparable standard. This CD is a delight to listen to and is very strongly recommended.”

FOLK NORTH WEST (England)
“No one else could have done justice to such a project. Máire’s unparalleled musicianship and sensitivity on harp is counterpointed throughout by Chris’s deft guitar artistry. Between them they weave a delicate latticework of shimmering sound that’s sheer perfection. As listening material it is unsensational and unassuming, a subtle sprinkling of magic dust and a soothing balm for jangled nerves. ”

TAPLAS (Wales)
"A little gem. The arrangements for harp and guitar are carefully thought out and every piece is exquisitely executed, the instruments always in complete sympathy with one another...Particularly impressive is Máire Dhall, where the silences ring out as clearly as the notes."

FOLK ON TAP (England)
"This magnificent collection from two superlative musicians is a welcome addition to the growing catalogue of records of this famous minstrel. In fact, in a plethora of Carolan records, this is the best. Quite apart from the playing, which is, as you would expect from Ní Chathasaigh and Newman, flawless, deft, delicate, uplifting, there is on offer a wider range of Carolan’s music than ever before (24 tracks here) and a thoroughly readable booklet on the composer and his music. If what you want to do is to hear just what it was that made this gifted blind musician an ornament to the tradition of harpers, then you will get an inkling here. Highly recommended."

TYKES NEWS (England)
"All super tunes, performed with flawless grace by Máire and Chris. There is sublime guitar on Eleanor Plunkett, and on the evocative Bridget Cruise, a beautiful composition for his first love, again in a traditional Irish song style. The playing of this duo exhibits a virtuosity and balance of expression combined with a simple elegance which has a reviewer running to the thesaurus in search of superlatives. Enchanting, expressive, a remarkable piece of work."

NEWPORT & CWMBRAN HERALD AND POST (Wales)
“An absolute gem of a recording... perfection... an outstanding album.”